The last few years have proven to be an age of outing. In recent news, several people in big companies and government agencies are being outed for doing or saying stupid, immoral, or illegal things. No one is perfect, and we all do and say stupid things – but there comes a time when watching what you say may cost you your job, reputation, or company’s reputation. 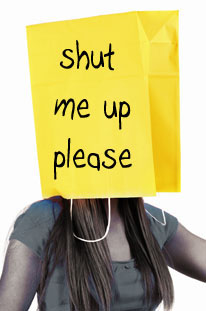 While I was having lunch in a restaurant the other day, there were two young women next to me that were difficult to ignore. Not only were we sitting close in proximity, one especially wasn’t the quietest chip in the bag. At first glance of the giant yellow company purse bag next to the woman sitting closest to me, I chalked it up to her having a lot of baggage. But then she announced what she does for a living. She represents a very large candy company with two initials – the one that sponsors a racecar driver – the one displayed on her baggage. I will refer to her as Miss Yellow Baggage.

I overheard the women’s personal issues and gossip about some people they knew, workplace drama about people being fired, the slight looks and whispers and giggles in my direction. I had to double check where I was because for a moment it seemed as if I were back in eighth grade.

While I didn’t get a very good look at Miss Yellow Baggage because she was primarily turned towards her friend and wearing a baseball cap, she was extremely loud – the type with a raspy smoker’s voice that certainly does not make for a nice, quiet meal. Miss YB boasted something so shocking and downright cruel that I will never forget: “I hate cats. If a cat is on the other side of the road, I will drive on the other side to hit it.”

I almost choked on my food, and it was obvious that she’d been heard, because Miss YB’s friend had been turned my way, noticed my expression, and whispered something about me hearing her. But Miss YB didn’t care. She just shrugged it off, snorted and laughed.

How could anyone think of doing such a thing to a harmless animal, much less boast about it in a public restaurant? I thought of my own baby kitties and how I had to bury one of them last year when he was hit by a car (perhaps Miss Yellow Baggage was in the neighborhood?). At that point I was ready to leave. My stomach was upset and I didn’t even enjoy the rest of my meal. All I wanted to do was get out of there and away from this big yellow baggage monster, and so I did.

I knew that if she were telling the truth about purposely running over cats, that she is or has broken the law, possibly even committed a felony. I looked up the statutes and I was right:

Florida Statute:
828.12. Cruelty to animals
(1) A person who unnecessarily overloads, overdrives, torments, deprives of necessary sustenance or shelter, or unnecessarily mutilates, or kills any animal, or causes the same to be done, or carries in or upon any vehicle, or otherwise, any animal in a cruel or inhumane manner, is guilty of a misdemeanor of the first degree, punishable as provided in s. 775.082 or by a fine of not more than $5,000, or both.

(2) A person who intentionally commits an act to any animal which results in the cruel death, or excessive or repeated infliction of unnecessary pain or suffering, or causes the same to be done, is guilty of a felony of the third degree, punishable as provided in s. 775.082 or by a fine of not more than $10,000, or both.

My entire drive home I thought about how awful that experience was. I wonder what her two-letter company would think about that? So I decided I would out her on my blog.

See, what Miss Yellow Baggage did not realize is that she was not sitting next to some ordinary person eating her lunch. She was sitting next to a cat loving, animal shelter volunteer who also just so happens to be a writer – and one that isn’t afraid to out her.

One thought on “Rep of Large Company Boasts About Animal Cruelty”