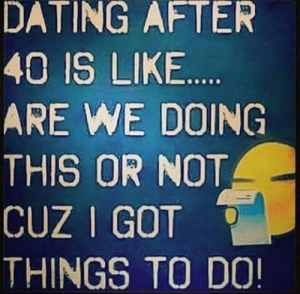 In my last post, I talked about dating being exhausting when people are energy vampires. But online dating itself is even worse. Before the actual date happens, having to read through 150 emails from pursuers is a daunting task, because you also have to view/read their profiles to see who these people are before answering them. It’s practically a job in itself. 90% of mine either get deleted or I politely tell them we are not a match. For most, they are thankful I even answer them.

For some, they want to know why we aren’t a match. Most of the time, I can tell whether or not they’ve read my profile, so I tell them just that. For example, if they are separated or still married, they obviously didn’t read my profile. Who the hell wants to date a married man? Not me! Or the age difference is too great – too young or too old doesn’t work for me either – and some (especially the younger ones) cannot seem to understand that. And at this point in life, I’m not interested in dating men with small children, and it seems there are so many in their 40s and 50s with small children.

And some act like it’s the end of the world if you don’t get back to them right away. Those are the “red flag” ones that I won’t even bother to answer at all if they can’t understand that most people don’t have time to sit on a dating site all day long to answer questions. One guy practically cried that I wasn’t interested… he said he was “a really nice guy” blah blah blah so why wouldn’t I go out with him? Seriously. I told him if he’s such a nice guy, he will find a match. This is exactly the type of crap that makes online dating exhausting. No one wants to open messages and have to deal with that.

But then there are the good dates that confuse the shit out of us. After Super Needy Guy, I met someone I was actually attracted to and had more in common with. Coach was in his early 50s and lived about an hour from me but frequents my area. I even met his sister and brother-in-law that were visiting. Coach is well-educated, good looking, polite, and seemed to have his shit together. We had a great time, and we both said we’d like to see each other again.

Coach was supposed to come back the following weekend, but something came up. Then I didn’t hear from him for about a week. I started suspecting he’s probably dating other women because he’s active on the Match site (yes it tells you that also!) or maybe he’s just a player, because to have a good date and then for someone to just fall off the radar is usually how it goes. And I don’t know how I missed it, but I went back to read his profile, and it said “I’m looking for women…” and that’s when I realized it was written in plural. Coach wasn’t looking for one woman, but still wanted something for the long run. No wonder I hadn’t heard from him. And due to his profession, location, and good looks, I’m pretty certain he’s surrounded by a multitude of beautiful women to choose from. So in my mind, I labeled him as a player.

Then I finally did hear from Coach. Match tells users when someone views their profile, so Coach said he “stopped in” and saw that I’d viewed him, asked how I was, and I wasn’t sure why he was messaging me on the site since he has my actual phone number. I would ask him questions, and he would avoid them. Very strange and very shady. Then I didn’t hear from him again for about two weeks. By then, I’d written him off.

So two weeks later, he said he may be coming back into my area that weekend and wanted to know if my friend’s place was available to rent for the night. I gave him her info and didn’t hear from him for a few more days. Coach messaged me that weekend and said he wasn’t going to make it on Saturday, but made plans with me to do a beach walk on Sunday morning. I thought it would be something fun and normal to do… I mean, I haven’t been on a beach walk with a man in I can’t remember how long.

Sunday came around. Coach was a no call, no show. I wasn’t sure if he ever made it into the area, so I texted him that afternoon saying I guess you didn’t make it over here? He said no, he decided to stay in his area and take a bike ride. Mmmmkay. I said well thanks for letting me know.

How fucking rude! That was the last I heard from him. Obviously, he’s a player and has zero respect for my time. So even though the date was good, the after-date was total bullshit. I don’t have time for that, either!